The Carriacou Historical Society is actively involved in archaeology right here on the island. We have hosted a number of digs spanning many years.  The following is a report by Dr. Quetta Kaye, one of the leaders of the project. 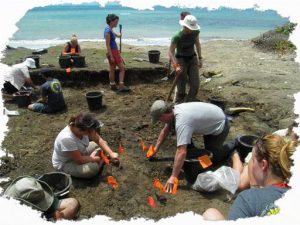 “The Carriacou Archaeology Project’s (CAP) 2003 field walking survey was the first attempt by professional archaeologists to systematically map the archaeology of the island. Eleven areas of special archaeological interest were recorded by the project’s directors, Quetta Kaye (UK), Scott Fitzpatrick (USA) and Michiel Kappers (The Netherlands) working with a team of US students.  Since 2003 seven seasons of fieldwork have been concentrated mainly on the coastal site of Grand Bay (the largest and considered most at risk through erosion), but with additional investigations at nearby Sabazan. 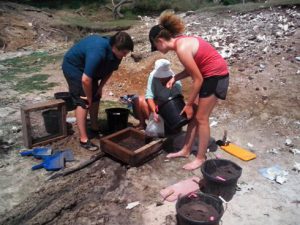 A total of 141 US and UK students, supported by academics in various disciplines, have volunteered their time and expertise to the project which has produced some interesting, challenging and unexpected results. These results have been published in 26 peer-reviewed publications as well as by presentations at numerous conferences. Copies of all the CAP’s published papers have been lodged with the Carriacou Historical Society (CHS) at the Hillsborough Museum as a significant research resource. 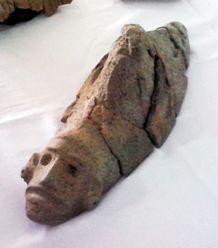 The results of a total nine months in the field and ten years of archaeological research and analysis have enabled the team to position the Amerindian population of Carriacou in the broader context of life in the Caribbean before European colonisation. 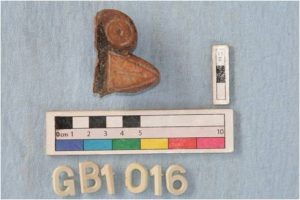 Evidence from analysis of pottery, the finding of artefact forms which can be linked to the islands of the Greater Antilles (like this Zemi), and the recovery of animal remains such as the agouti, guinea pig, opossum and peccary (all translocations from the mainland), plus remains of intensively harvested marine resources, indicate a thriving society which survived for nearly one thousand years and which had extensive networks of inter-island exchange. Evidence from the broad dietary remains found at the sites contributed to a healthy lifestyle which is reflected in the results of analysis of the excavated remains of thirty-nine human burials (mainly from the period ca. AD 1000-1400), whose bones exhibit no signs of malnutrition, but six of whom reveal broken bones consistent with accidental injuries.

In addition to the more than fifty shell adzes (tools) which have been found, a selection of the many shell and bone artefacts recovered and examples of the one hundred pottery “adornos” (modelled decorative items of human, animal or combined forms which were attached to the rims of pots) are shown here.

At the end of each excavation season a box of the more interesting “special” finds has regularly been kept apart from the other boxes to encourage the CHS (or any other interested group) to access material more suitable for wider public appreciation and to encourage interest in the archaeology of the island. 248 boxes of excavated artefacts are now stored in the shipping container which the Project supplied to the CHS in 2014. 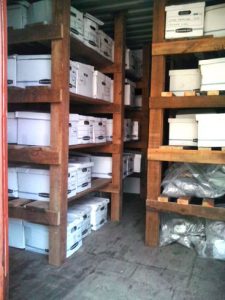 Raising public awareness of archaeology has been one of the principles behind the CAP’s activities in Carriacou. We have given talks to schoolchildren, encouraged sites visits during our excavations, held Public Open Days at the end of each season with displays of recent finds, donated laminated posters to decorate the Museum’s walls and created display booklets to explain aspects of Amerindian lifeways to give visitors to the Museum a background in understanding the prehistoric occupants of the island. We have also deposited a bound copy of all published papers and a CD of the Project’s computer database with the CHS:  examples of just some of the ways in which we hope we have provided an archaeological resource to benefit the people of Carriacou.”

Carriacou’s Archaeology since 2003:
a summary of work by the Carriacou Archaeology Project.
Quetta Kaye, Secretary, International Association for Caribbean Archaeology