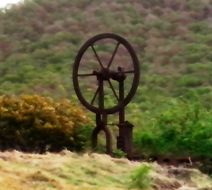 In December 2009 we were delighted to welcome David Hayes to Carriacou for the purpose of surveying our industrial heritage.

David Hayes was born on St. Croix and grew up there while being educated in the USA. He has always been interested in the history and heritage of the Caribbean, from the Pre-Columbian to recent political events. For more than thirty years, he has been everything from an Historic American Engineering Record driver and go-fer to the president of heritage societies and on the boards of pan Caribbean museums and archaeology groups. He holds a Masters of Science in Industrial Archaeology from Michigan Technological University for which he wrote about the development of the sugar factory at the Whim Plantation Museum of the St. Croix Landmarks Society. This museum covers the Danish colonial period of St. Croix. He also helped create the St. Croix Archaeological Society and is its president, chief curator and exhibit designer. This Society covers the pre-Columbian period of St. Croix. He sits on the Board of the International Association for Caribbean Archaeology and is the Secretary of the Museums Association of the Caribbean. He is also a member of around a dozen specialist societies in both the USA and Europe on specific areas of heritage study. He writes:

The recording and preservation of the colonial heritage of the Caribbean is a complex job. The traditional way has been to glorify the white masters and their lives while not saying much about the enslaved Africans and their descendants, who now make up the vast majority the current population. This frame makes the heritage a foreign topic to most people, especially the young. If this continues the heritage will be meaningless, except as a set of artifacts that can be sold for cash.

However if the interpretation is re-centered on the majority of the people of the island, without forgetting the white component, the youth can be involved and can lead the preservation of their island’s heritage. The issue of how to build a sustainable museum is one that has been vexing the museological world recently. The changes in learning styles of the youth of today, the changing tastes of the possible museum visitor and the recent world economic meltdown have all lead to changes. In the USA many small museum are closing. Even parts of large, world renowned museums like Colonial Williamsburg have been closed.

Given this, I visited Carriacou for the purpose of surveying the existing industrial heritage. Carriacou was different than most islands of the Caribbean in two ways. It is much smaller than most islands. Also it had a moving multi-legged industrial and economic base. One must look at indigo, sugar, cotton and the very rare lime juice industries. I did not do extensive historical research before arriving, I was primarily concerned with artifacts on the ground.