The Carriacou Museum was founded in 1976 and has occupied three locations in Hillsborough before settling into its present home on Paterson Street in 1989. In fact, the present building is of historical interest in its own right being an old cotton ginnery (the second oldest in the world) when it ceased operating in 1979. 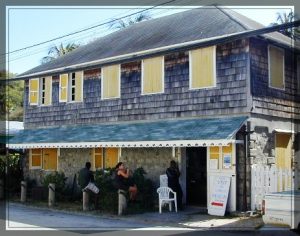 The Museum has an extensive collection of Amerindian and African artifacts both on display in the museum and in a 160 square foot catalogued storage container.  Also on display are documents, furniture, glassware, and pottery from colonial times.

The Museum hosts field trips as school classes from Grenada, Carriacou and Petite Martinique visit from time to time.  Distinguished guests, such as the Governor General of Grenada, and a delegation from UNESCO have also visited.

The delegation from UNESCO said

In the shop area there is a nice selection of historical prints, local arts and crafts, tee shirts as well as books on island culture and music CDs of the island’s many festivals.

This is one of the few privately funded museums in the Caribbean and depends on public donations, grants, and fees from its international membership.

If the Caribbean were to be covered by a system of organizations following the example of the Carriacou Historical Society, the problem of the search for Caribbean Identity might soon be solved.